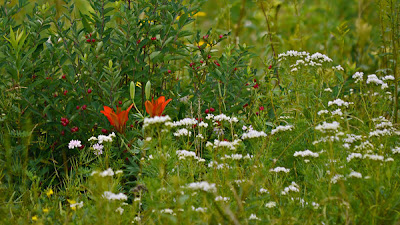 Despite the fact that it is mid-July, the so-called "summer birding doldrums", I am happy to report there are many birds using the field at Crane WMA this time of year. The strategy is to get an early start. Bird song and activity drop off quickly after 10AM and model airplane enthusiasts fill the skies with their wings and distinctive sounds by mid-morning as well. Three of us ventured out into the field at 7AM under very humid and mostly cloudy skies. The temperature was in the 70sF, but when the sun peaked through it quickly felt like 90F! Another reason for a visit during this steamy month is for the wildflowers, which are in peak form and attract many insects, including several species of butterflies!

This large (1,800+ acres) Wildlife Management Area on Cape Cod features a large sandplain grassland habitat and adjacent pine barren/scrub oak forest. The open areas are fine Grasshopper Sparrow habitat, as they prefer dry grassland interspersed with small bushes. This is one of only a few easily accessible places to get up-close looks at this state-listed specie. They did not disappoint today. There were 6 or 7 of them "tee-up" and singing from small bushes. Two Grasshopper Sparrows were seen carrying food, no doubt being brought to their young.


This field seems to be a premier spot in the state for Orchard Orioles. I'm guessing these orioles disperse to this area in mid-July as post-breeding family groups. We observed several groups of 3-5 birds all over the fields. Many of these Orchard Orioles are females and or young birds of the year. Their plumage is mostly yellow with a sharply pointed blackish bill and are noticably smaller than the more familiar Baltimore Oriole. A quick glance at one may have one thinking Yellow Warbler instead of oriole!
Most of the expected species were in attendance besides Northern Bobwhite (probably around, but not for us!). Seems like this bird is getting harder to find here, even though it is still regularly stocked during the hunting season.

*Many thanks to Rick Schofield for these great photos 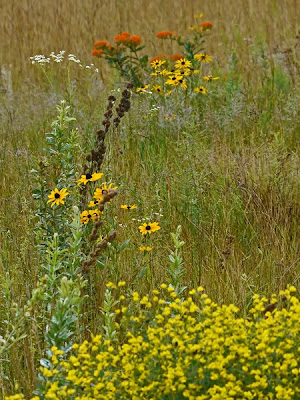 This report was generated automatically by eBird v3 (http://ebird.org)

A combined South Shore Bird Club and Brookline Bird Club group went out on the 9 a.m. Captain John and Sons whale watching boat out of Plymouth. This trip typically has a good variety of pelagic birds and a good showing of whales. This year's trip, not so much. Not even a shorebird on Plymouth beach, coming or going.

In talking with the naturalist on board, birds have been absent on most trips. Not only were birds absent, whales were a little hard to find as we had to go to the outer side of Race Point in Provincetwon.

Only two whales were spotted on this trip. One Minke and one Finback.

As for birds, only TWO Shearwaters were seen, one Great and one long distant Manx. Storm-petrel numbers were also way down. This was slowest trip in some time. Thanks to all who participated.

Here is an initial summary of birds seen. Glenn d'Entremont may have some updated numbers.

No comments:
Email ThisBlogThis!Share to TwitterShare to FacebookShare to Pinterest

4 of us braved the temps and walked the 4 1/2 mile trip into Gate 10 and back.  This trip was birdy in the beginning, but after 10:00ish it was quite quiet.  Interesting were 4 Guinea Fowl which we saw before we walked into the gate (on Rt 202) and when we returned they were under my car!  Missing were Red-breasted Nuthatch and Hermit Thrush.