Bare Cove is a 469 acre Sanctuary(and dog walking park which we managed nicely to avoid with different trails along the main path) in Hingham. There were 12 participants.  It yielded 44 species of birds. (Canada Goose not on list but heard by some.) We had  Cardinals and Osprey on their nest  and  DC cormorants carrying nesting material.

We missed on any warblers but had  two  blue- gray gnatcathers. We had
large numbers of black duck , buffleheads, and DC cormorants with four
great Egrets and four snowy egrets. We had several what we believe were
greater yellow legs. The only sparrows were song, white throated,
chipping and an amazing savannah with bright yellow lores.


No comments:
Email ThisBlogThis!Share to TwitterShare to FacebookShare to Pinterest


Due to weather conditions favorable for migration the entire week before the trip, World's End April 2014 stands out as one of the best ever for both total number of species seen. World's End is a fun early spring trip that combines finding first of the year spring migrants and late-wintering waterfowl in one beautiful natural area. Highlights included: Red-throated Loon, breeding plumage Horned Grebe, Glossy Ibis, American Oystercatcher, singing Eastern Bluebirds, American Kestrel and a gorgeous buff-colored Red Fox who snuggled down behind a stone wall after he attracted our attention away from some Tree swallows.Looking back to 2013 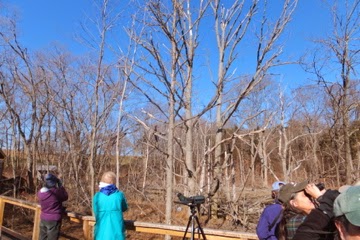 While 2014 had almost double the species of 2013, it is notable what birds were missed this year:
Common loon, Brant, Greater yellowlegs, Bonaparte's gull, Ring-billed Gull (I'm sure there were some on Sara Island), Belted kingfisher
Weather: Fair, Lg. Wind, 60sF.

Show message history
No comments:
Email ThisBlogThis!Share to TwitterShare to FacebookShare to Pinterest

The day loomed foggy, and birds were in short supply until the air cleared in about an hour.  A quickly seen Fox Sparrow was one of the few birds encountered at the onset of the walk.    A Glaucous Gull  at the top of Turkey Hill called incessantly as it flew overhead showing its pure white wing tips, top and bottom. Although the bill wasn't observed, the grey on the wing tops suggested an adult bird. Our band of six felt spirits soar as the sun made a brief appearance;  later clouds rolled in returning the cooler, damper air.  Of the 29 species seen, the other bird of note was a Northern Shrike seen perched in a tree atop Turkey Hill at the end of the walk when only three of us remained.   This three to four mile loop is usually quite birdy and will certainly bring many surprises as migration begins to heat up.