On August 7th, ten club members joined me on a quest for shorebirds in the communities of Scituate, Quincy, and Easton.  A weak cold front passed through  the area overnight  so conditions were optimal for observing southbound migrants from arctic and subarctic latitudes as well as resident species like Killdeer and Spotted Sandpipers.

We started the morning at the mud flat near Judge Cushing Rd. in Scituate and were instantly rewarded with looks at ninety two Semipalmated Sandpipers, four Greater Yellowlegs, six Lesser Yellowlegs, and six Least Sandpipers.  Our group pored over the “peep” (i.e., the word used to describe Least, Semipalmated, Western, White-rumped, and Baird’s sandpipers collectively) hoping to find something uncommon or rare in the mixed flock of birds.  For the uninitiated, this can be a bit like trying to find a Susan B. Anthony dollar in a bucket full of quarters scattered about your feet.  Everyone in our group was up for the challenge as they scoped the muddy flats in earnest.

Our next stop was the Scituate Reservoir.  The continuing drought has created excellent shorebird foraging habitat at this location.  Muddy areas with shallow pools of water are hard to come by this summer due to the exceptionally dry conditions.  Several small groups of shorebirds were observed on the mucky expanse busily feeding and preening in the increasing heat of the day.  We were able to study a particularly confiding White-rumped Sandpiper as it plunged its head into the water repeatedly in search of prey.

We noted the long primaries extending beyond the tail tip (an adaptation for long distance migration) on this large and relatively long-billed peep as it continued feeding.  The adult bird exhibited a grayish head and breast (giving it a somewhat hooded appearance), a prominent white supercilium, and fine streaking along the flanks.  Although we were close enough to the bird at times, we were not able to discern the reddish base of the lower mandible that is sometimes visible in better lighting.   The bird even emitted its incredibly high pitched mouse-like call on several occasions.  Lastly, the least conspicuous field mark – the white rump – was noted as the bird made several short distance flights away from us. 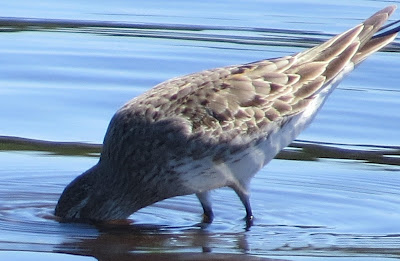 Subsequently,  we made a brief stop at Musquashicut Pond in Scituate.  The tide was too high at this location, but we still observed eleven Semipalmated Plovers and fifteen Semipalmated Sandpipers.  Our group also enjoyed five Snowy Egrets crowded amongst some Double-crested Cormorants on nearby rocks.  In addition, adult and juvenile Least Terns were flying about the pond and alighting on a stony bar in the vicinity of the egrets.  Despite the forecast for cooler weather, the temperature soared towards the ninety degree mark.  Shorebirding and shade are a rare combination, but we were committed to our search regardless of the heat and glare.

Continuing, we drove to the pannes near the Kennedy Center in the Squantum section of Quincy.  We timed our visit to correspond with high tide since shorebirds in the immediate area are frequently pushed off any exposed flats available at low tide and concentrated in the salt pannes as the tide rises.  The salt pannes were productive as is typical at this site in the first half of August.  Eighteen Greater Yellowlegs huddled amongst the Spartina grass and Salicornia while their smaller congeners – the Lesser Yellowlegs – gleaned aquatic prey nearby.  Club members were happy to add five Short-billed Dowitchers from this location to the shorebird trip tally.  The dowitchers probed the mud in their characteristic sewing machine manner and provided excellent opportunities for studying shorebird behavior.

While most of the group opted to end the day in Quincy (home to the majority of participants today), several club members decided to check the wet and muddy flats at Wheaton Farm in Easton.  The water level in the pond that is adjacent to this conservation area has been altered and the recently exposed wet areas, with attendant vegetation and tree stumps, has been a boon for migrant shorebirds in recent weeks.

Today was no exception and the shorebird show was impressive.  The most interesting observation was an unusually high count of Solitary Sandpipers.  We counted fifteen Solitary Sandpipers in a single scan of the flats.  This close relative of both yellowlegs species prefers freshwater habitat during its migration, but is usually encountered in small numbers that typically do not exceed two or three individuals.  The Solitary Sandpiper breeds in boreal forest habitat and has the unique breeding strategy (among North American shorebirds) of nesting in trees and utilizing remnant songbird nests.

In addition to the Solitary Sandpipers, we observed an estimated one hundred and twenty Least Sandpipers darting  in and out of the vegetation for brief scope views.  Killdeer vocalized and flew about the flats nervously as Lesser Yellowlegs and a lone Greater Yellowlegs bobbed and dipped in the wetter sections of the flats.  Occasionally, an unknown source of anxiety startled some of the shorebirds and gave us a better sense of the numbers of individuals we were observing.   The rolling breeps of Least Sandpipers mixed with the softer tu-tus of Lesser Yellowlegs as the emphatic two part cries of the Killdeer echoed throughout the flats whenever the shorebirds were spooked by something.

We also observed eleven Great Egrets and a single Snowy Egret foraging in the vicinity of the shorebirds.  Semipalmated Plovers ran and paused repeatedly on the sparsely vegetated section of the flats while Spotted Sandpipers teetered and alighted on some of the tree stumps dotting the mucky landscape.
Our group had an enjoyable day exploring a number of productive shorebirding sites on the South Shore and beyond.  Some of us will be looking at these shorebird hotspots in the coming weeks to see what drops in for some rest and sustenance before continuing on to an island in the Caribbean, the coast of Brazil, or a final destination at Tierra del Fuego.