The Virtual South Shore Bird Club “walk” began Saturday, October 3, under an azure sky with hardly a breath of wind in most places.   Duck hunters hate that weather because ducks tend to relax rather than fly about, volunteering to be shot at.   In fact, they actually call it, derisively, “bluebird weather.”    It was bluebird weather, in that Glenn D’entremont found Eastern bluebirds on the Cape on a Brookline Bird Club trip.   Glenn finds so many birds that I suspect it is the birds who watch him, because he also reported Pine siskins, a Purple finch, a Northern parula, a Redstart,  Indigo bunting,  Eastern pewee, four different woodpeckers, etc., etc.   Sheesh.

Brian Vigorito was up early (unless he was listening from his bed) and reported an Eastern screech owl at Ferry Hill Thicket in Marshfield.  He also found four Black-crowned and six Yellow-crowned night herons at Damon’s Point, jutting into the North River.   His real crown was the adult Bald eagle, plus photo,  in a nearby tree.    He also provided a neat photo of a Carolina wren.

We tend to think birds should  be found at special places, and often they are, yet Christine and Steven Whitebread, and Mary Jo Foti and Karen Fiske, remind us that often birds present themselves when we’re doing other things.   The Whitebreads report Fish crows, Double-crested cormorants, and Canada geese at the Hazardous Waste Dropoff in Quincy, while Mary Jo and Karen report (including photo) a Blue-headed vireo at the Falmouth Composting Facility.  The fortunate Whitebreads also saw (seconded by Pat) Black skimmers and a Black-headed gull at Wollaston Beach, Quincy.

As usual, there were non-avian sightings, including  asters and a remarkable photo by Kathy Rawdon of a sadly deceased Mola mola in Fire Road Lagoon in Provincetown.  Kathy also visited the Eastham stump dump.    There were flowers, too.   David and Julianne Mehegan provided photos of Field bindweed, Beech drops, and Stiff aster.   Pete Jacobson and Christine photographed and discussed  other asters.   Several birders must have “attended” Wayne Petersen’s remarkable illustrated Goldenrod lecture last week, because  Christine,  Carol, and Nate Marchessault all uploaded dazzling Goldenrod photos.   Nate, who visited Pochet Island in East Orleans, also shared a lovely shot of a RB nuthatch probably wondering, “Why is the world upside down?”

North of Boston, Moe and Carol Molander reported an American avocet at Plum Island (if this were chess, you’d include a !! for a great move), a Sora, and provided an excellent photo of three plastic penguins of uncertain parentage on a log in the Merrimack River.   (This reminded me of an exotic duck I saw idling passively last spring near the far bank of a pond at the Burrage Wildlife Management Area.  In a state of great excitement, I hastened  around the pond, but when I drew close and fixed the object  in my binoculars, it turned out to be a species not  found in nature,  only in the duck-hunting department at Bass Pro Shops.)

Almost as odd -- but very much alive -- was Beth’s photograph of a snow-white Wild turkey, fraternizing with brown cousins in a Barnstable yard.   She reported they are one in 100,000.   Was one of these fellows the ancestor of the hapless billions of white ones headed for the Thanksgiving platters?  Beth also reported Great blue herons, among others, and a Red-headed (or Red-bellied?) woodpecker at Crows Pasture.

Down Bristol County way (does anyone use that name any more?), Pamela Coravos and Kim Wylie found a Marsh wren, Sora, Common gallinule, Hudsonian Godwit, Northern shovelers, and American coot at Richmond Pond, Acoaxet (part of Westport).   Kim also snapped a picture of  a Marbled godwit (right, Kim? or was that the Hudsonian?).  Kim judged Acoaxet to be “hard to beat today,” and who could disagree?

Thoreau wrote in Walden, “I have traveled a good deal in Concord,” and David and Julianne did the same in Hingham, checking out Turkey Hill, Triphammer Pond, and McKenna Marsh, where they saw usual suspects: RB wood, CA wren, Eastern phoebe, Belted kingfisher, Common yellowthroat, Catbirds and Eastern towhees.   Their most abundant sighting at Turkey Hill (where they did see turkeys) was Canis familiaris, mostly unleashed.  Around the old runways of the former South Weymouth Naval Air station, they saw a Flicker, Red-shouldered hawk, Field and Song sparrows, and several Killdeer.   For salt air and seabirds, they also went to Humarock Beach, Scituate, and saw large flocks of White-winged scoters and a few Surf scoters.   In the nearby tidal South River, there were Greater yellowlegs and Great Egrets in the marsh or mud, one Tree swallow, and six or eight Cedar waxwings flew over.   After dark, from their back deck adjacent to wetland woods in Norwell, they heard the hooting of a Great horned owl.    So the day began and ended, fittingly enough, with Strigidae.

Nonbirders sometimes say, when they encounter birders, “Seen any good birds?”    Today the answer was, as always,  “They’re all good.”  Even the plastic ones.

No comments:
Email ThisBlogThis!Share to TwitterShare to FacebookShare to Pinterest

Note: To those who are unfamiliar, these social distancing “walks” are not in-person walks but rather a group chat where members share their experiences for the morning and stay connected. South Shore Bird Club is strict about (and very impressed by its members) adhering to social distancing guidelines, which includes avoiding populated areas, large groups, and close social interaction. We fully support members enjoying the healing and mindfulness that nature can provide and want to foster a social environment for those who may feel isolated-these walks are intended to achieve both of these goals with safety at the forefront of our mission.
With temperatures in the fifties at the beginning of the day on September 12, it is definitely starting to feel more like Fall and less like Summer. Despite the chilly start, we had 15 participants in the chat or submitting eBird lists. It was clear and sunny all day long and the temperature eventually warmed up.
Many of us were hoping today would be good for migrating songbirds, but unfortunately things didn’t turn out that way. Overall passerine numbers were quite low, although we did manage to find a few migrants. Glenn and Ernie found a Blackburnian Warbler at Plum Island. Keelin had Blue-headed Vireo, Nashville Warbler, and Blackpoll Warbler among other finds at Pochet Island. And Linde found the first Dark-eyed Junco of the season at Squantum.
Although the songbirds did not cooperate today, shorebird migration was still in full swing. Brian, Glenn, and Ernie were all at Plum Island today. Highlights there included a Baird’s Sandpiper, two Buff-breasted Sandpipers, and a Hudsonian Godwit. Carol and Moe tried to relocate a Common Ringed Plover found earlier today at Gooseberry Island but unfortunately, this species didn’t make it onto our list. Nate and Pete had a Wilson’s Phalarope at Red Brook Reservoir.
Non-bird sightings this week include Pickerel Frog, White-tailed Deer, and some interesting mushrooms!

Brian Vigorito
No comments:
Email ThisBlogThis!Share to TwitterShare to FacebookShare to Pinterest

Note: To those who are unfamiliar, these social distancing “walks” are not in-person walks but rather a group chat where members share their experiences for the morning and stay connected.  South Shore Bird Club is strict about (and very impressed by its members) adhering to social distancing guidelines, which includes avoiding populated areas, large groups, and close social interaction.  We fully support members enjoying the healing and mindfulness that nature can provide and want to foster a social environment for those who may feel isolated-these walks are intended to achieve both of these goals with safety at the forefront of our mission.

Saturday proved to be a beautiful day for all manner of nature appreciation. Glenn kicked it off the by jumping on a BBC trip to
Daniel Webster where they had Eastern Screech Owl. Carol headed to Gooseberry Island in Westport for a stellar day of birding
with 44 species, including an impressive number of warblers - Black and White, American Redstart, Magnolia, Common
Yellowthroat, Tennessee, Black-throated Green, and Cape May - in addition to Dickcissel, Baltimore Oriole, and 18 Red-breasted
Nuthatches. While Nate was out and about, he managed to flush a juvenile Cooper's Hawk and, 20 steps further, an unfortunate
Ruffed Grouse who ended up being pursued by the Cooper's! Fortunately, he didn't hear any further ruckus so perhaps it was a
lucky day for the RUGR. Kim spotted a less fortunate bird being defeathered by a crow on a telephone wire. While we're on the
subject of hunting, Nate walked into what he thought were crow hunters raising their own ruckus while knocking back a couple
of early morning brews. Lisa made the astute observation that referring to someone walking around with a gun and drinking at 9am
a hunter is an insult to hunters. Good call Lisa. But Nate did take the time to point out that they shared a friendly greeting. That's
something anyway. Kathleen's close encounter of a human kind was definitely more upbeat - a wedding at Hellcat. Wayne called
it the first modern occurrence at Plum Island.
On the waterfowl scene, Elizabeth had a Common Loon on Onset Bay, Kathleen spotted a Eurasian Wigeon on Plum Island, and
Brian located a couple of Pied-billed Grebes at Burrage. Keelin worked Sandy Neck in search of fall migrants, which undoubtedly
included a good deal of walking through soft sand. On the pelagic front, David had Great Shearwater off Minot Beach. He also
scouted a virtually dry Thompson Pond where he observed not only avian species, but dragonflies and a variety of plants. Lisa
was able to get some phone pics of both peeps and wild mushrooms while Wayne confirmed Brian's photo of Royal Fern.
As the daylight waned, Lisa was at Ellisville where she grabbed a terrific digiscoped pic of a Clapper Rail while Brian spotted
six Common Nighthawks over Burrage with Sandhill Cranes calling in the distance.
- Mary Jo Foti 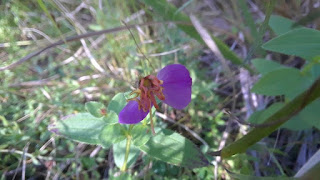 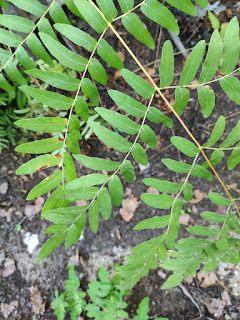 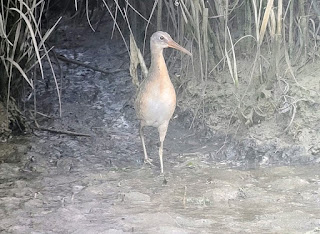 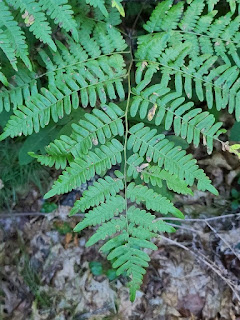 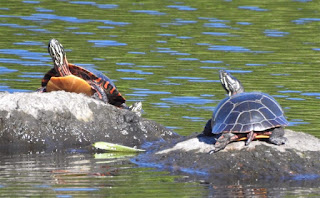 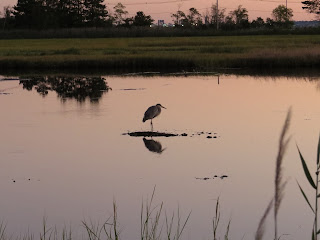 Photo by Linda Eyster    Great Blue Heron
Linda began her day with sunrise at Moswetuset Hummock, but also checked out the [Kennedy Center] panne at dawn. In the middle was a Great Blue Heron whose lovely blue-gray color contrasted with the pink hues of the water.
No comments:
Email ThisBlogThis!Share to TwitterShare to FacebookShare to Pinterest